Some primatologists assert that great apes (chimpanzees, bonobos, gorillas, and orangutans) have reached a level of developmental sophistication mimicking the human Stone Age, a period defined by the use of naturally occurring items as tools, primarily to acquire food. Sticks were used to poke at and retrieve potential food sources in inaccessible places such as tree cavities. Stones were used to crush seed and nut shells to get at the nutritious material inside. A very significant attribute of the human Stone Age was the inventive modification of natural items for a specific purpose. This would include sharpening the end of a tree branch to form a spear, or chipping stones to form a sharp-edged cutting tool. The Stone Age, which began around 3 million years ago, ended with the advent of the Bronze Age around 6000 years ago.

have been observed using leaves and moss to suck up water to use as sponges for grooming. A mandrill, a primate resembling a baboon, was observed flattening the end of a twig to scrape dirt from under its fingernails. Many other examples of primate tool use can be found.

It’s very possible that much of the advances in tool use came about spontaneously; perhaps due to the creativity of a great ape Edison or Einstein. One significant example, however, is clearly of a different ilk.

In 2008, a male orangutan in Borneo was photographed on the shore of a river, clinging to overhead branches attempting to spear a fish with a pole. Although unsuccessful, he later improved the technique to effectively spear fish caught in fishermen’s lines. The point is, this spectacular example of tool use was copied from the orangutan’s observation of native spear wielding fishermen.

And, that brings us to the point of this article. Although human tool use achievements in the Stone Age, the Bronze Age (around the time of the construction of the Giza pyramids) and even the Iron Age may also have been spontaneous and without any independent influence, some may very well not have been.

Some experts are convinced that, like the Boreno orangutan, humans had outside assistance in some of the advances made in our early history. They argue that many stunning instances of ancient architectural feats for instance, represent construction techniques well beyond our present day comprehension. A prime example is the 4600 year old Great Pyramid of Giza. We haven’t a clue as to how the ancient Egyptians managed to quarry, transport, meticulously shape and place the over 2 million stones each weighing around 3 tons that comprise the 481 foot tall edifice.

Did mankind harness fire, invent the wheel, develop verbal and written language, mathematics art, and an appreciation of music, engage in agriculture, domesticate animals, learn to smelt metals, etc. as a “natural” consequence of evolution? Or, as some ufologists suggest, were outside influences at play? Are humans, whose genome deviates from that of chimpanzees by a mere 1.2%, a product of an alien genetic experiment? Have extraterrestrials been monitoring our evolutionary progress over the eons, occasionally tweaking the trajectory by subtle influence or even outright intervention? Are they watching our advancement (or lack of it) on their occasional present-day visits here as a continuation of the program? Compelling possibilities no doubt, but we’ll probably never know for certain.

Meanwhile, a few million years late, the great apes with their newly minted tool use appear to be slowly gaining on us. How long will it be before a Chimp sits at his computer corresponding with other simians just as we humans are doing at this moment? What would become of us in that instance? If sympathetic extraterrestrials didn’t intervene, could mankind be heading toward Charlton Heston’s startling revelation as in that well-known and thrilling 1970s sci-fi movie?

Thanks to Wikipedia.org, and Primatology.net for supporting details. 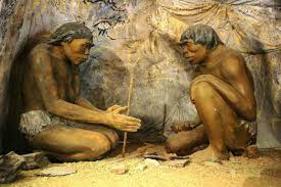 Primatologist and anthropologist Jane Goodall, who for 60 years studied wild chimpanzees in Tanzania’s Gombe Stream National Park, observed Chimps stripping leaves from stems to use as probes for acquiring insects to eat. This discovery of the manufacture and use of a tool by a primate dismayed the experts who, prior to 1990, were convinced the concept was the exclusive province of humans.

In 1994, Sumatran orangutans were discovered using sticks to pry open thorny fruits to get at the pulp without incurring  painful jabs. Chimps and bonobos